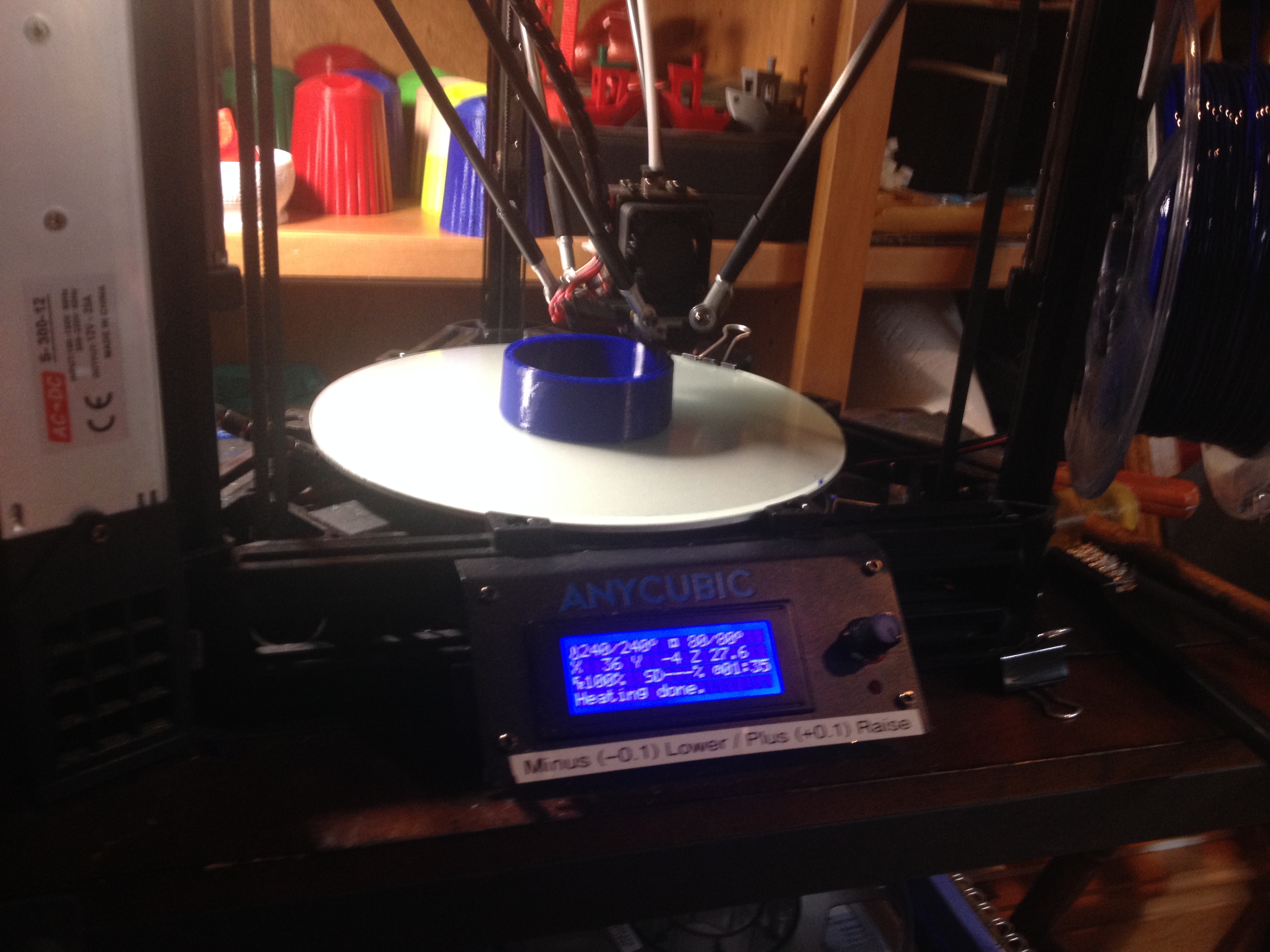 New PETG print after nozzle change.Been messing around for two days trying to figure out how to get decent PETG prints off my A/C Delta printer. Then I remembered my PLA prints were looking a bit crappy for quite a while, too. But PETG is a far fussier material than PLA, so I was thinking, doing a little mental math… 2+2=3.14159265…

Then I looked really close to the printing going on with the top layers on the current test PETG print I was running. “Dang! That nozzle tip looks awful short!” I said to myself.  It’s drawing the shoulder of the nozzle across the top of the print!!

Of course, I couldn’t see that at that moment, but it was obvious I needed to change out the nozzle.

With the (very) old nozzle removed, I was able to examine it under my photo microscope and grab these pictures. 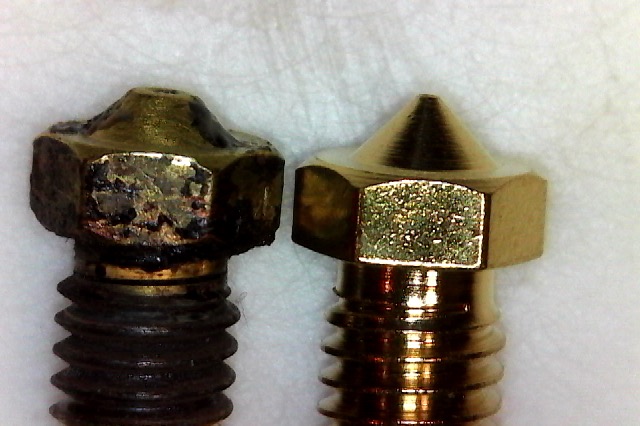 The new on the left the old on the right. Think there was a problem there.

Yeah, that old nozzle probably made at LEAST 100 good prints or more. The quality was dropping but the present PETG really drove the issue home. I’ll be changing nozzles a bit more often now I see how they wear.

I was wondering about how nozzles change with time as I was doing my test prints. I have read the claim that flow through them with stuff like carbon fiber wear the hole bigger, but it looks to me that wear off the end is also a big problem. It depends on if the hole is tapered inside or has a fairly long parallel wall hole. This may be a combination of both.

I also read that some nozzles carbon up inside from overheating and the effective hole diameter gets smaller. I bought an expensive steel nozzle months ago and have never installed it. Not even now. I have run a lot of wood PLA through the old nozzle, but it says wood does not wear out the nozzle. That old nozzle has seen PLA. ABS, wood, and PETG. After a good purge, they all flowed fine.

Months ago, when I was playing with printing test parts for a U-Build-It 3D printer, the same spool PETG was not printing quite like I expected. I just blamed it on poor S3D settings. It was probably the point when I should (could) have changed out the nozzle. That old one was in there forever even then.

Now wiser than I was yesterday, this old dog can still learn a few tricks… 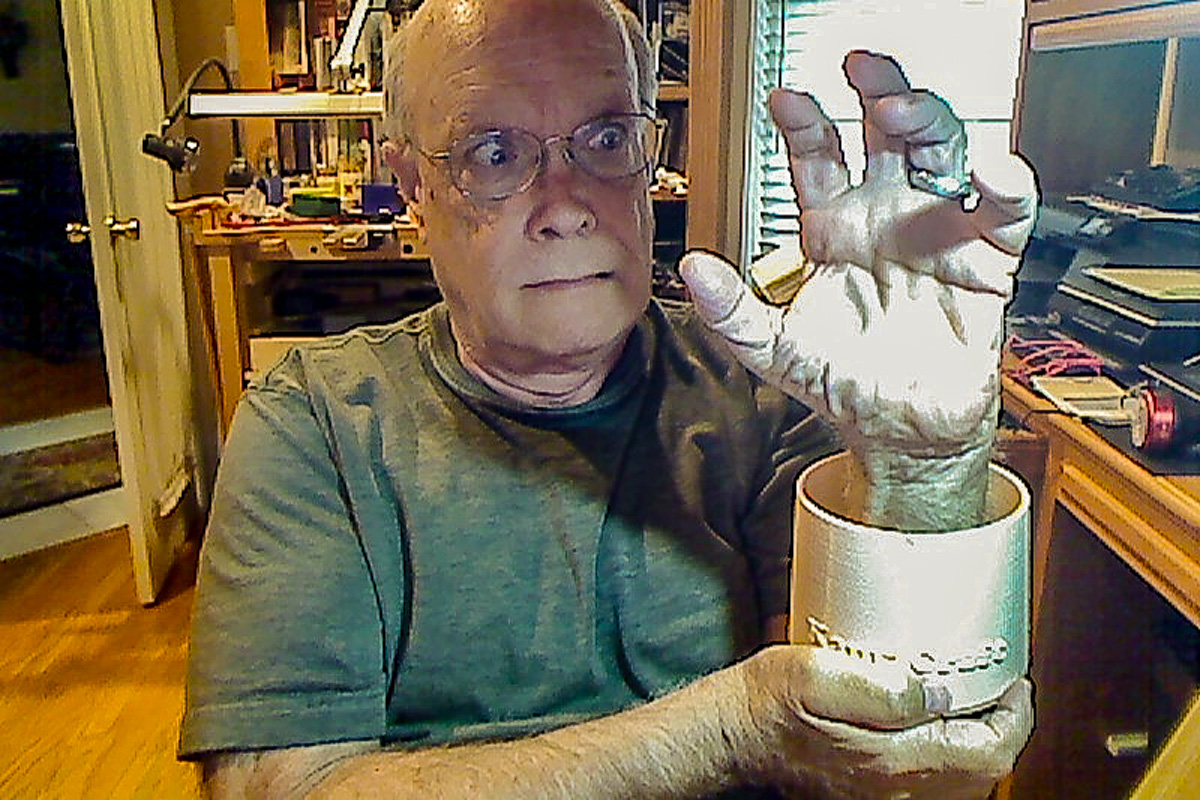 Not every three dimensional printed item has to be all plastic. A frighting idea! This project is called the Cancan.

The metal can in the picture was used just by itself for storing the variety of desk items shown. After looking at it (the side ribs are interesting) and using it for a few years, the idea came...  it needs to be a 3D printed item. The inspiration was to incorporate the metal can into the printed design. The idea was to "get out of the box" from thinking only in plastic.

The can was measured and the design drawn in Fusion360. F-360 is not good for adding text on a cylinder so that was done with MS 3D Builder. The color is a bit ugly, a pinkish "flesh" color. I wanted to use it up, and this was a good project to do that. I saved some material by not making the bottom solid. Cutouts in the sides could have been an interesting feature too, showing the ribs on the can.

Version two has been drawn and has some large raised "rivit heads" embossed around near the top to help grip the cancan, It's not likely to get printed as I don't realy need, or have space for, version two.

This is a "show and tell" about trying new ways to usee 3D printing. 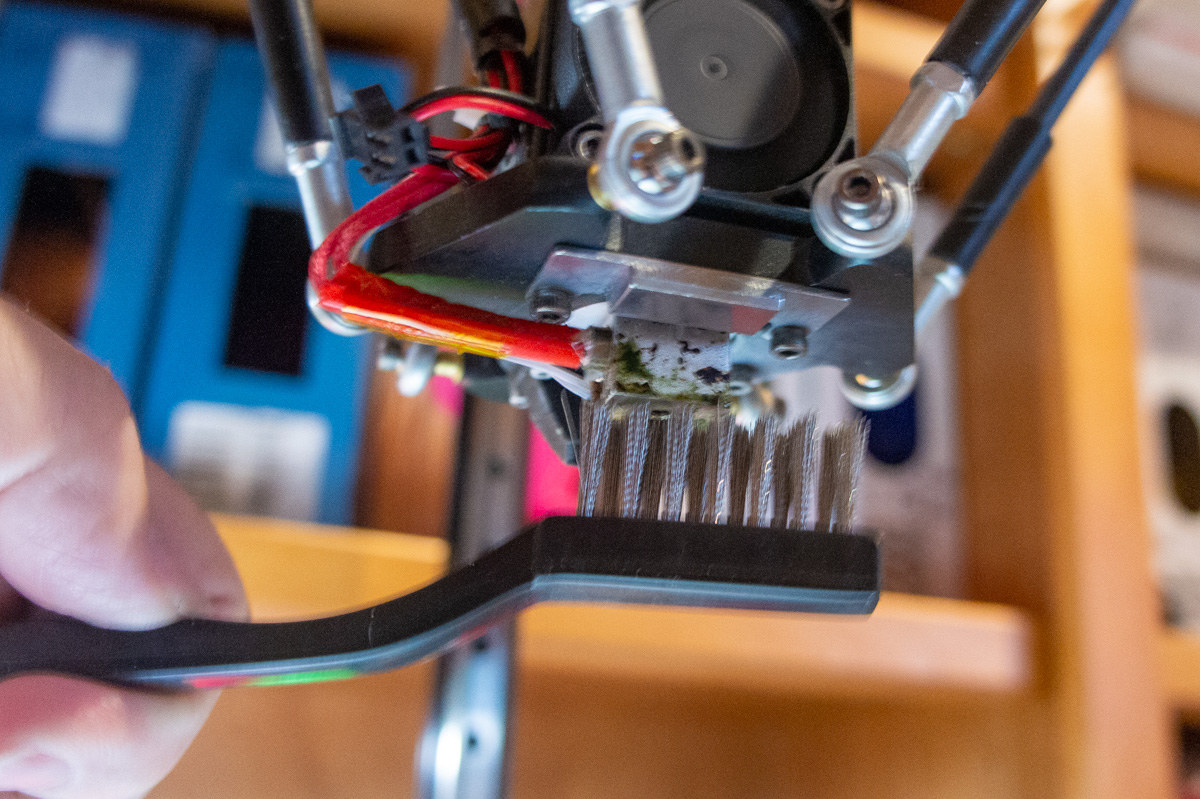 I got the original brush-off inspiration when I first started 3D printing now years ago. I am certainly not the first person to think of the idea. I have seen it mentioned by other 3D print people when I was reviewing Amazon user-reviews when picking this new brush. Yep the brush-off is a real brush. A small wire brush to be exact.

It is used to clean the old hot plastic debris off the nozzle of the FDM printer. It works best when the nozzle is up to full temperature.

I use the brush to clear the bit of ooze just before printing starts. The plastic cools immediately in the brush and the user must pick it out and keep the wire bristles clean of the debris. Otherwise, it will melt back onto the hot nozzle. Yuck.

I can print literally for months on the same nozzle by keeping it clean. Neither nozzle brushing nor clearing the brush is a hard task.

My original brush was one I used in my machine shop for cleaning chips from threads (after cutting them) and other metal shop tasks. The handle was wood and a bit grimy. I think it dropped into the waste can, as one day it simply disappeared from my 3D printing area. 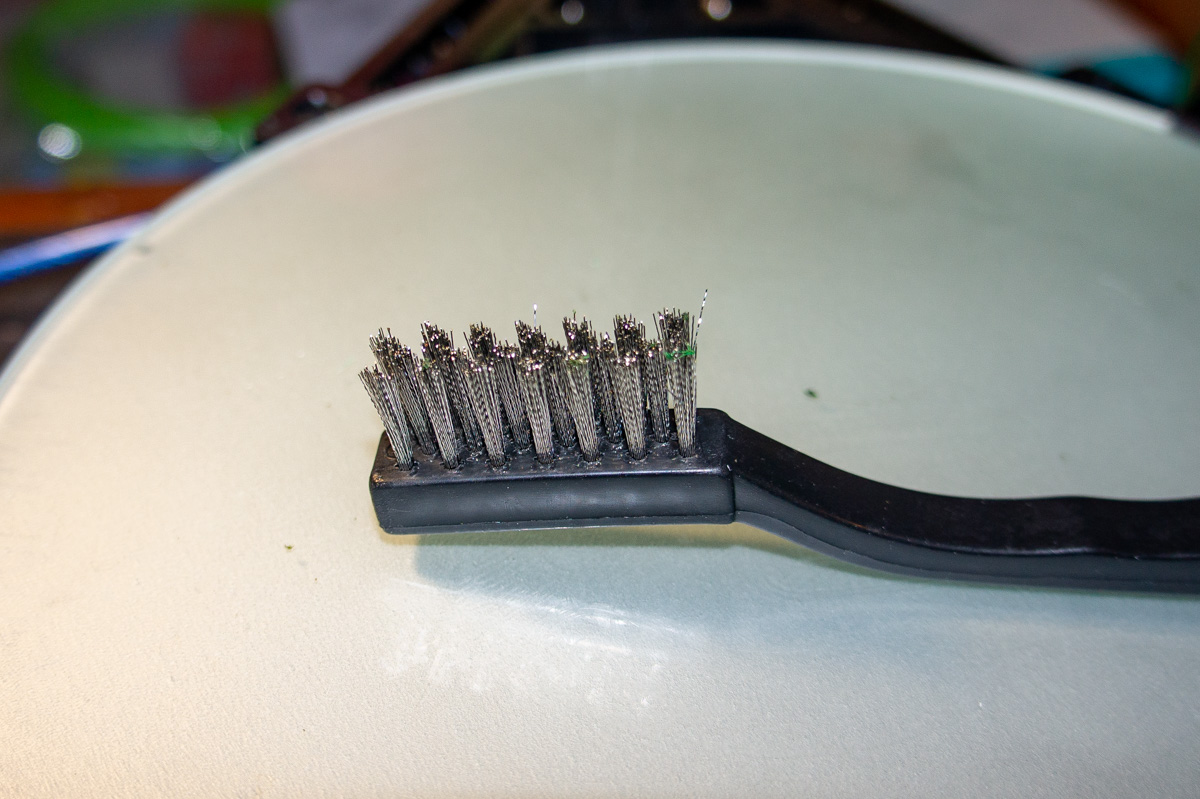 This new one hasn’t stood the test of time, so I won’t recommend ithe brand-name quite yet. I have used it several times and works better than my original brush. It has stainless steel bristles.

These brushes are also made with brass bristles. My wife likes to use them around the needle area of her quilting sewing machines to clear lint fuzz.

I highly recommend this or any similar brush be used to keep FDM printing nozzles in top (clean) condition. You might find one or two more useful around the workshop as well as the sewing machine. 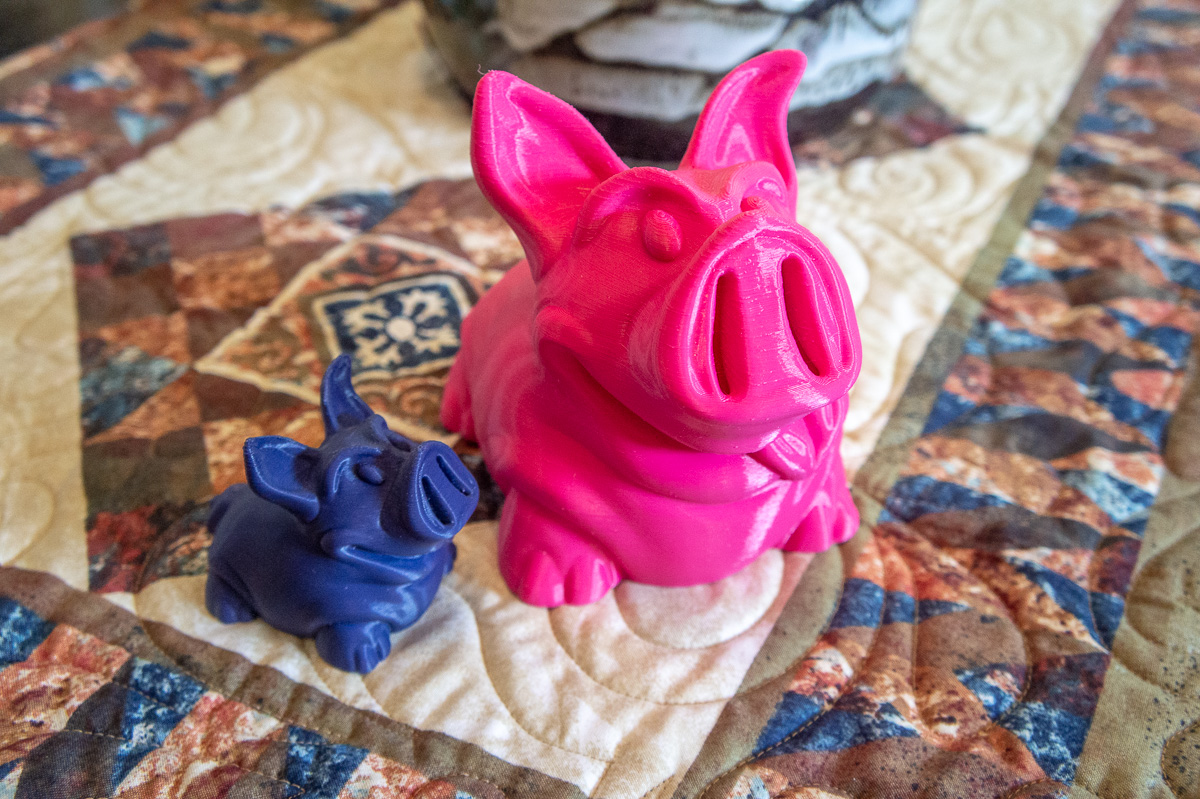 I like to design my own prints. But sometimes something grabs my interest that someone else has created. That happened here. I ran across this very different looking piggy bank on Thingiverse. https://www.thingiverse.com/thing:3490324 . In this design, coins are incerted through the nose!

It's kind of fierce/ugly but then sort of has a fun whimsical quality. I like it!

I decided I would print a few. The blue one is 50% reduction or 1/8 the volume of the original. It is too small to be a bank. I printed it first to get a feel of how the Piggy would look printed. The pink Piggy is full size and quarters will eaisly fit through the nose.

Both versions were printed on MamaCetus. The blue one is 100 micron layers and the pink one is 200 micron layers. The big pink took about 15 hours to print. The picture on the printer is about half way through.

I intend to print one more in "flesh" color PLA. Never used that color so not sure exactly how it will look. Piggy banks are usually pink but pigs are not. I will see how a "flesh" colored piggy bank looks.

My granddaughter has a birthday next week and I though of this as an unusual and whimsical gift. Most people (and kids) today don't have many coins on hand. But I thought it is kind of a throwback gift. This is a very unusual piggy bank. 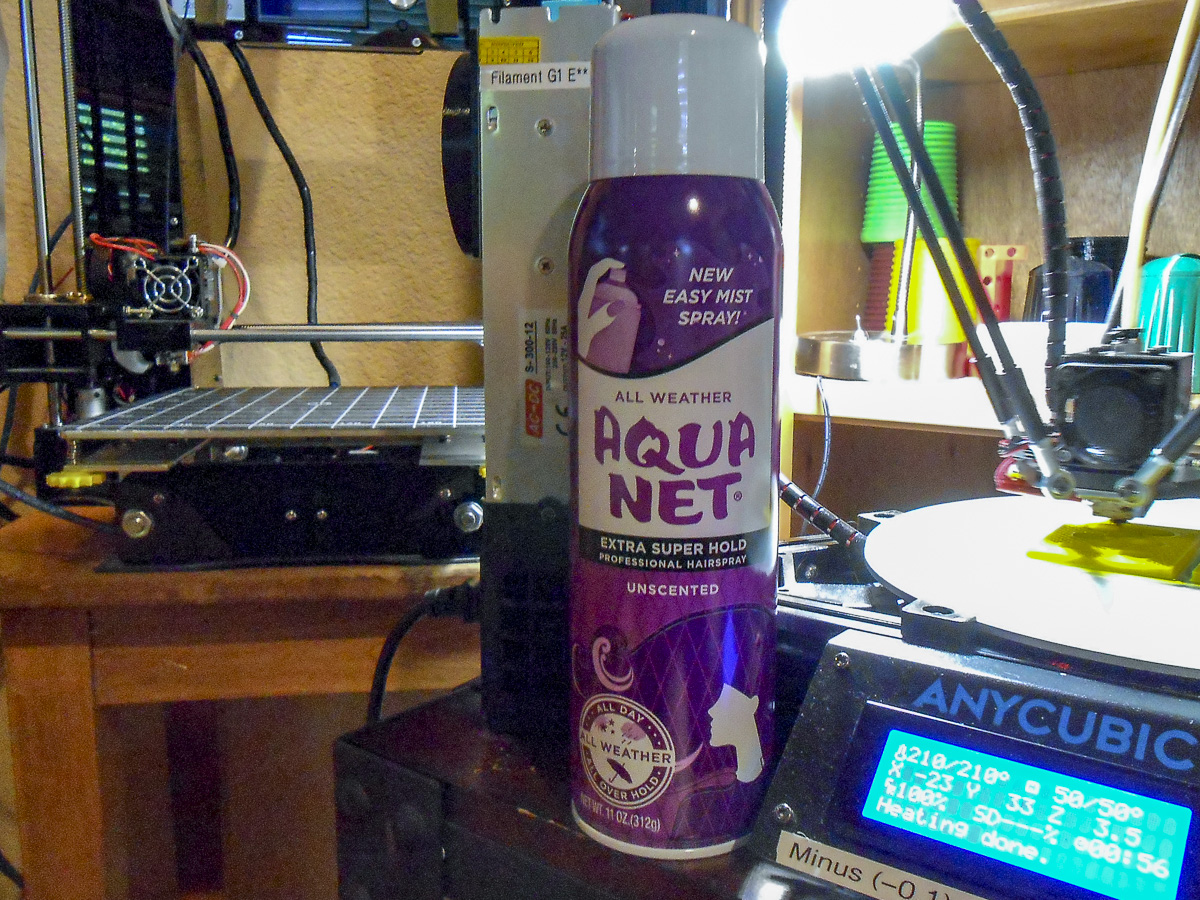