I took a leap of faith. I joined my first kickstarter campaign. Tiertime Cetus has developed a new dual color FDM 3D printer they call Cetus2. Not to be confused with Cetus Mk1, Mk2 or Mk3.

I assume Cetus2 as it prints with two filaments out of one nozzle.

It’s apparently not a brand new idea. The Kickstarter has lots of information and video of working prototypes. The nozzle is a new proprietary system and has been patented. It is the heart of the new system.

The color switch doesn’t look critically perfect in the demo video, but far better than the move-and-purge of my other multi-color single nozzle FDM printers.

It’s new and inventive and I am willing to be an early user.

This is December, 2021 and the Cetus2 will not be shipped until May 2022 if it stays on schedule. That is always subject to change with Kickstarters.

This Kickstarter is more like a market test than a development funding. The development seems to be (mostly) over and the “team” is checking if it is OK to go into full production.

I have well over two years’ experience with single nozzle multi color printing. I love the results. I also know the issues with my Geeetech A20M and T systems (2 color, 3 color).

Tiertime Cetus2 has hit most if not all the “right stuff” buttons. Proof is in the functioning, so that is still an unknown.

I will provide a link to the Kickstarter campaign. This is not an endorsement of the product or the company. I just like what I have seen and like I said, am willing to be an early adopter.

I already have all three versions of the first Cetus. It has been a love/hate relationship, but far more love than hate. There is seldom anything “perfect” with any 3D printing hardware and operations.

Six months of expectations and maybe a few more “tweaks” before we have a product in hand. Any more comments from me before then are just conjecture or additional information released by Tiertime.

This should prove an interesting six months wait. Use THIS LINK to visit the CETUS2 KickStarter site and I will receive credit for the referal. Thanks! 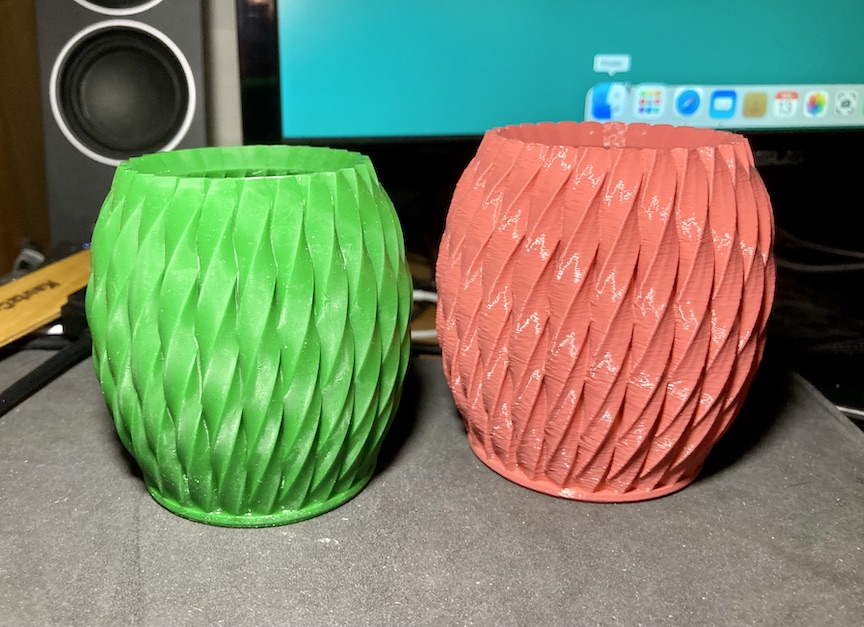 My old interest was stimulated by a fellow 3D enthusiast to go do some MSLA (Masked Sterolithography) 3D resin prints. I have all the necessary equipment but have not been actively printing using the process for many months.

There is no question that almost every type of SLA printing produces the finest resolution and details in 3D prints for a hobbyist printer. The low cost of MSLA brings it into reach of the average hobbyist budget.

This post is not about the pros and cons of the process. I like MSLA because of the superior details it can reproduce without the layering lines of FDM (Fused Deposition Modeling) filament printing.

I can endure the efforts and materials required for MSLA printing because I truly enjoy the results. Usually very high quality.

That does not imply that every print is perfect without effort. Also not every  design is a good candidate for MSLA printing.

Shown in this post is a very small razor blade storage box and a small vase. Both of which are my designs and have previously been printed using FDM and now using MSLA.

The red vase is extruded PLA+ and the green is photo-resin. The green was also scaled 95% so it wold fit on the Anycubic Photon Mono SE printer shown in other pictures.  Stand way back and they both look good, but look close, there is a big difference.

I am now stimulated to do a few more MSLA prints. I have plenty of resin and I have the time. There is no excuse. I don’t need one. I just love the high quality results.

Printer size limits the range of prints I can do. Not yet in the market for a larger printer. If I get bitten harder by MSLA and need to create larger or higher quantity of items, then that will justify a larger system. The reality is the larger printers are not a good choice for small “onesies” prints. Printer size should be chosen for the item print size or number of multiple prints desired.

Printing ten items on one build plate takes the same amount of time as printing one item. Not less material but huge time advantage. The full build plate area is exposed (printed) at one time in a few seconds.

This may be the start for me doing more resin prints. I’ll go where the results take me. It depends on what I can design and if other folks like what they see with resin based printed items.

Many options to explore and enjoy.

Not Bearing the Load 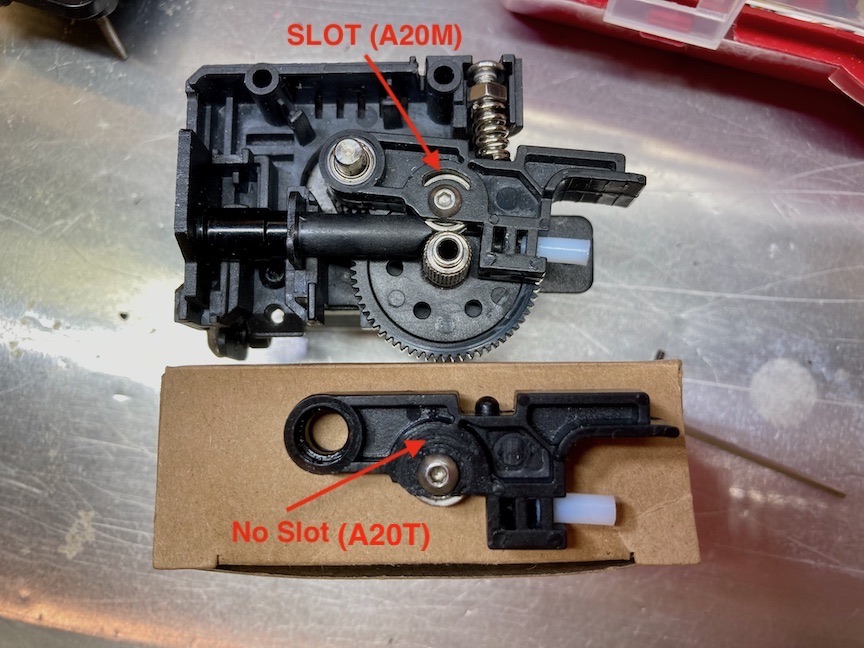 I love the prints my Geeetech A20 printers make. I don’t exactly love the printers. I have an A20M (2 color) and an A20T (3 color). Owning both indicates I don’t actually hate them. They are just hard to live with…

The A20M was first. The original mixing extruder hot end had a design flaw. There were two very tiny multi orifice plates in the melted plastic flow path. One for each filament. I assume they were an attempt to mix colors when extruding. What they actually did was constantly plug up.

I ordered a new hot end from China when I discover a new improved A20M hot end was available without the tiny multi orifice plates. But delivery was going to be over a month.

Both printers use the same design filament stepper drive. Geeetech calls it the Titian. Borden tubes and remote drives are unavoidable in most single nozzle extruders. No room on the hot end for multiple motor drives.

The Titian has a geared-down drive system to improve feed torque. Don’t know how really necessary that might be, but they like to brag about it.

All five of my drives have worked well for several years and hundreds of prints.

But I have now discovered a design weakness. The tiny idler wheel that presses the filament (under spring pressure) against the toothed drive wheel has a very tiny ball bearing. The wheel itself is mounted almost totally enclosed in its mount (see first picture) 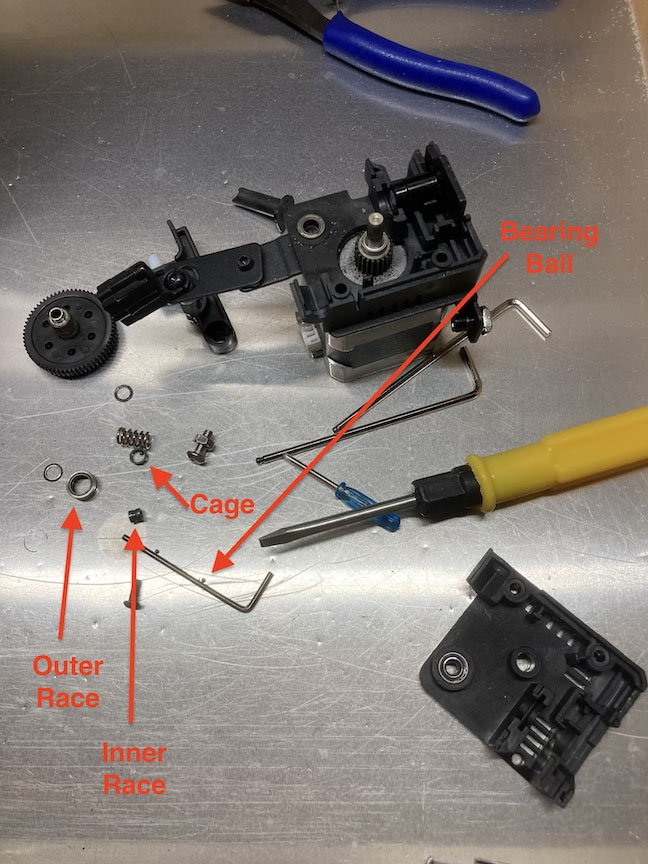 In two of my Titian drives, one on each printer, this bearing has seized and the pressure wheel is frozen solid with no rotation. When it fails, weird squeaking and clicking sounds emanate from the drives when trying to feed and the gear quickly grinds a notch in the filament and flow stops.

The first drive (A20M), I got the axel screw out but the bearing and its microscopic balls just fell apart all over my work space (picture 2). With the A20T drive arm, the axel screw will not come out and the wheel is totally locked into the arm and doesn’t rotate. The A20T arm is the one on the box in picture 1.

There has been a small design change in the pressure arm. The Titian drive taken off the A20M has a clearance slot in the arm to let filament “dust” escape. The  arm from the A20T Titian does not have the slot. It was packed with debris. No idea which is the “current” design until my new parts are received. I have five Titan repair kits on order @ $20 ea.

The drives have operated for more than a year with no issues. I do think the tiny ball bearing is inadequate for the task. Certainly not designed and rated to take the spring pressure loads. The bearings are sealed and inaccessible, so no way to lubricate. Certainly a design flaw in bearing choice. Yearly bearing changeout should not be necessary.

I have had no such problem with my five other FDM printer filament drives.

I may get another year or two from the A20’s. Then it’s EOL* for them. 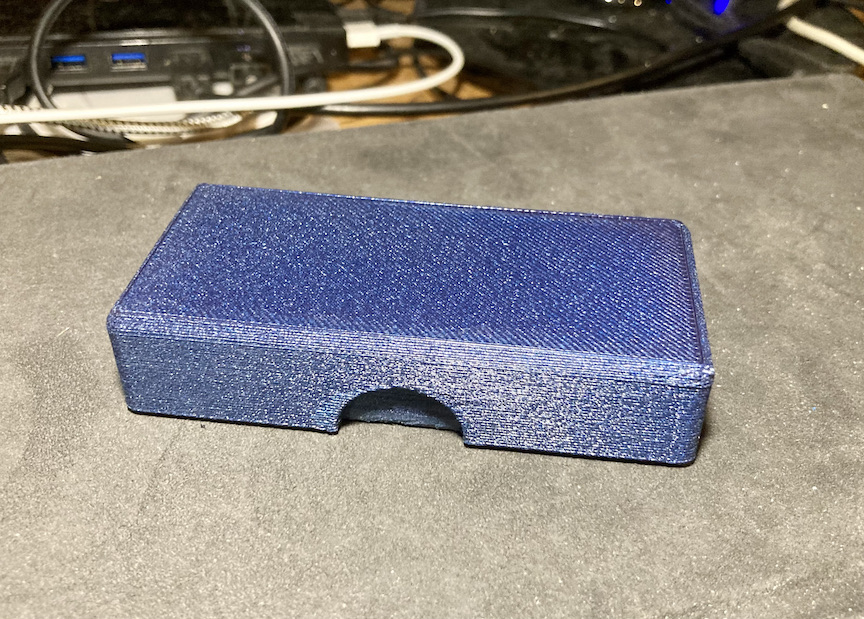 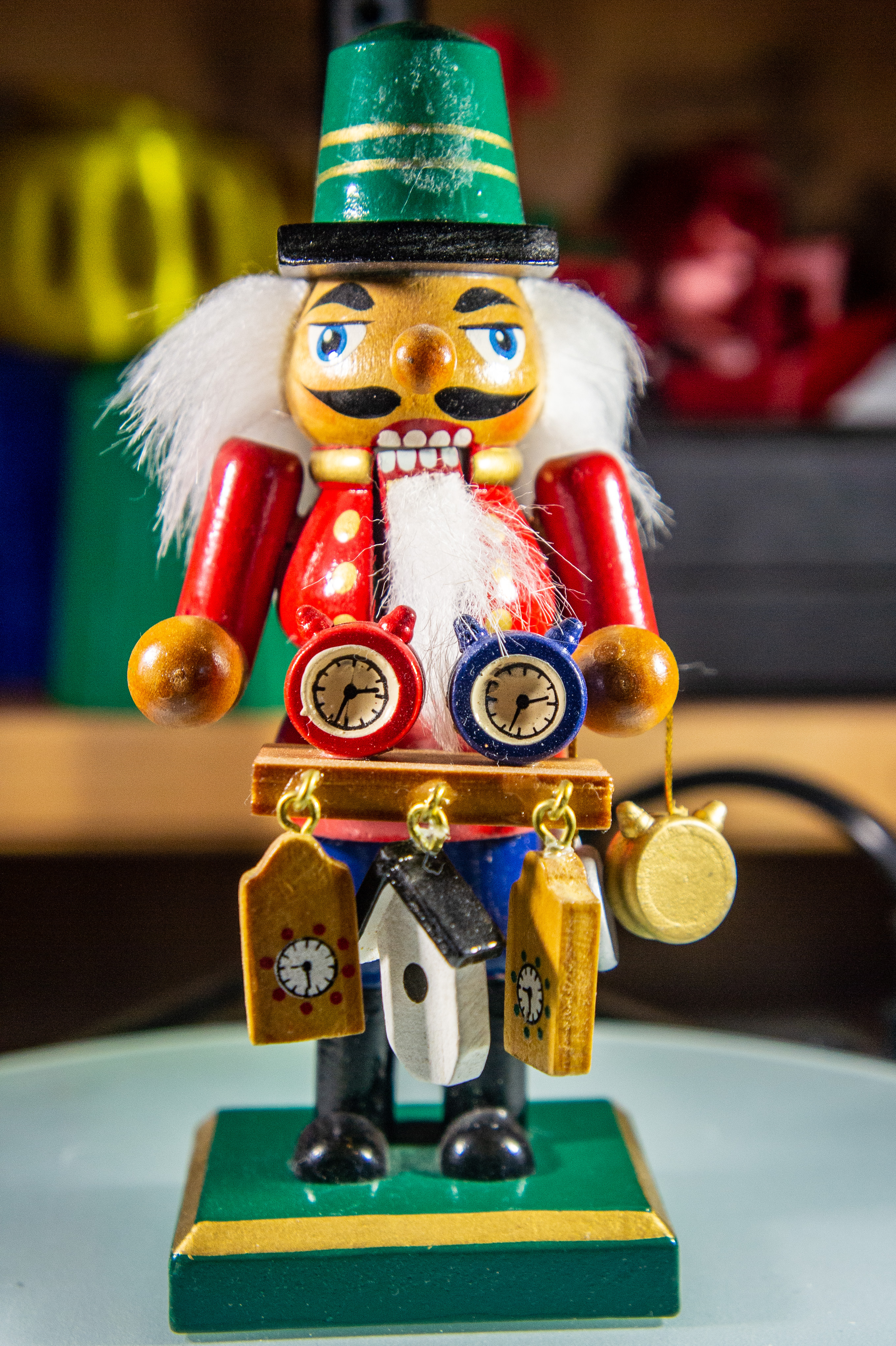