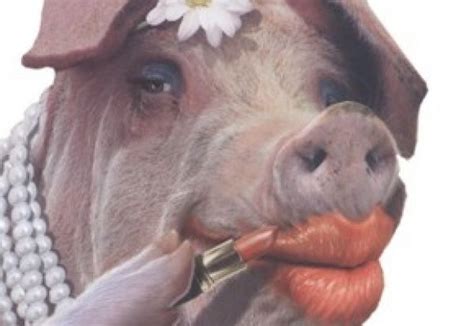 First impression of the new version 5 of Simplify 3D (S3Dv5) printing slicer is that it is like putting lipstick on a pig. It may dress the pig up a bit but it is still a pig. Albeit a pretty pig.

That’s not kissing the pig. It just my general reaction of this very overdue upgrade from version 4.1.2.

So, this is my initial impression of the update and not a repeat of all of the new features. If one needs to know what has changed, read the marketing propaganda straight from the company web site HERE. Note: First Impressions are subject to change...

I actually LIKE the S3D software. I just paid to update my two old versions. It is just not an earth shaking improvement of Version 4.1.2. But it IS an overdue upgrade that has finally appeared after several years in a deep freeze.

Arrangements and page layouts have changed to create a new look. (The lipstick) But it is still the old S3D. A sprinkling of new features that have long existed in the FREE software from the FDM hardware makers.

That makes the new S3D V5 more of a catch-up edition than a new leader of the pack.

The biggest impression for me was the new color coding of the scripts. More lipstick, but I like the look. The real-time animated print display feature has been removed. There is a new variable density infill feature. It's the same feature that printed supports have had for years. Denser layers at the top. Good addition. Why the real-time live animation is gone is a guess that it may have been too miuch overhead, but I do miss it.

Many features yet to explore. There is a lot that has changed or has been added. Found one bug where closing the "Variable Settings" wizzard kills the entire application. I am sure that will soon be fixed.

The new auto-configure editing is a game changer. I can at last have total control over what gets auto config’d with “Material” and “Quality” and create new categories. This configuration power is gonna blow the minds of the newbies who are afraid to touch a pre-built config file. Only the real PRO's are going to appreciate what's under the skin of the new S3D. It’s a face lift on the surface but dig in a bit, there are REAL tools for those who understand FDM.

I like the improvements. They help, each in their own way.  Paying for them is no big issue for me. It’s a business product not funded by hardware sales. I understand. But, whining about paying for tools is an immature expression of intitlement.

S3D works well. I like how it works. It’s actually easier to use than the free slicers that are made primarily for their products hardware and (oh, by the way…) can be adapted for other printers. But not all other printers. I use and like CURA and PrusaSlicer. I am not a fan-boy of any of them. They too are tools.

S3Dv5 is the Swiss Army Knife of slicers. There was never anything functionally WRONG with S3Dv4 other than (not free) and a long lack of ongoing feature updates.

$199 for a new buy is a big investment. Upgrades are far less but may be subject to change so I won’t publish what I paid. If you already own and like S3Dv4, buy the update.

New buyers, S3Dv5 is a good solid FDM slicer with lots of good features that just work. The direct machine control with graphic preview animated display has always been an outstanding feature that differentiates S3D from many other slicers. (If you choose to use it.). Too bad the live view while printing is gone.

Or… just keep riding the free bus. Makes no difference to me. :)