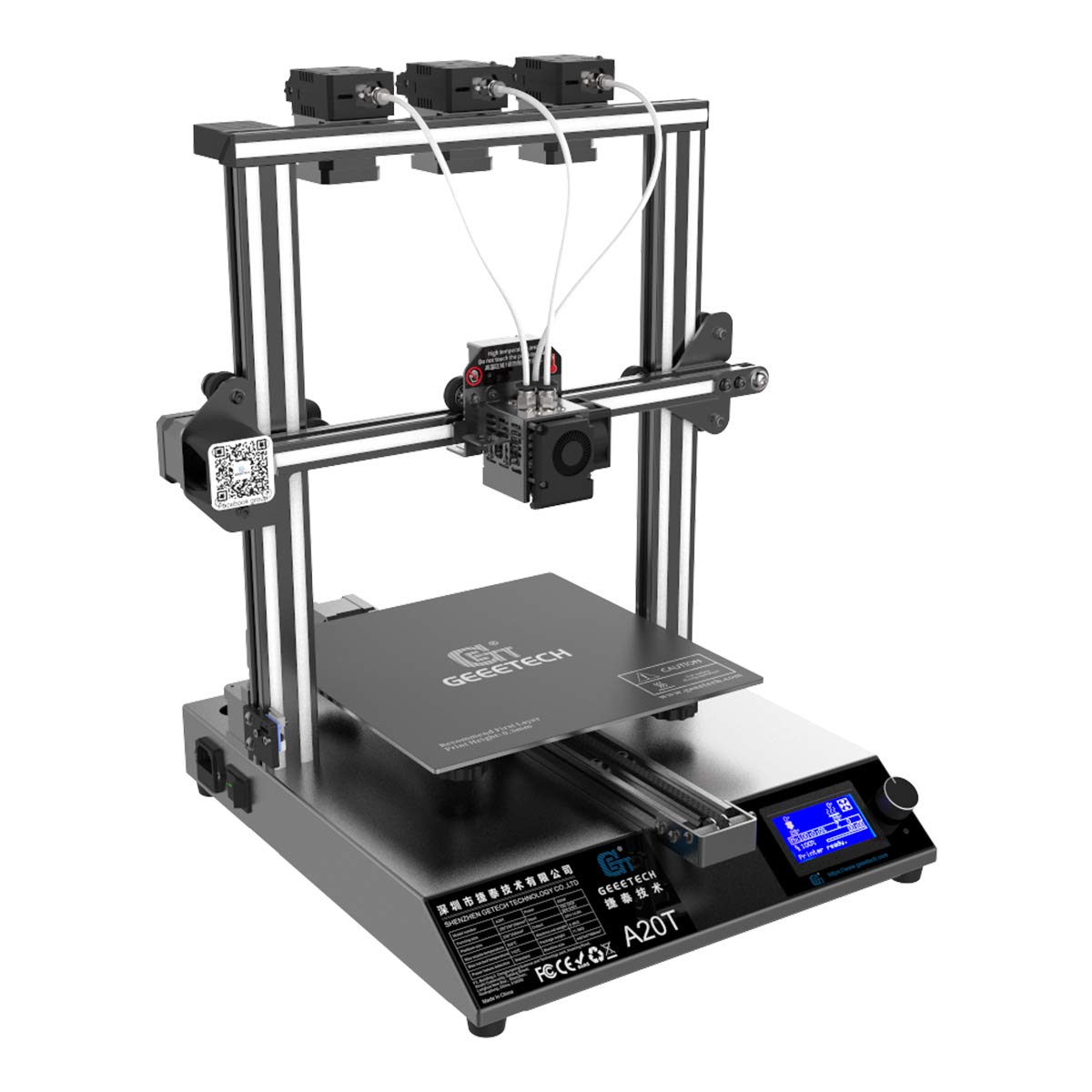 Geeetech A20TI have previously posted I ordered a Geeetech A20T three color single nozzle printer. It is a first cousin to the Geeetech A20M. Only real difference is the addition of the third color extruder feeder and three color nozzle assembly.

I striped-out the nozzle threads on the A20M which is non-repairable. The new “replacement” extruder requires several months delivery from China. One has been ordered. So, I decided to move up to the A20T while I am waiting for repair parts. From what I can determine, the A20M has changed styles on the two-color extruder so the old style I have is becoming pure unobtainium. Except by direct order to China.

I am posting some of the pictures of the packing and general appearance of the new A20T. Like I say, it is very much the same as the A20M. It is amazing build quality for a $400.00 three color printer.

Some fine tuning is required and expected during assembly. It is not RTR (Ready To Run) as it is shipped semi disassembled. The Z axis nut was very loose in its bracket (tighten two screws). The same condition existed on the A20M when assembled.

The A29T also required some free play removed from the Y travel. Simple turn of the eccentric adjuster under the bed and all is well.

I did not install the broken or loss-of-filament detectors. They are a PITA when loading filament and I have never had an issue needing such auto detection. It’s a marketing gimmick for inexperienced users who fear filament run-out.

After full assembly, the first task is manual leveling. I added a borate glass bed on top of the aluminum bed. I raised the Z axis limit switch 3MM to accommodate the added height. Simple two screw adjustment on the easily assessable switch.

Then on to the manufacturers recommended leveling procedure. No issues at all.

I ordered the auto leveling “3D Touch” sensor for the A20T. It is exactly the same as the one I installed on the A20M. However, at this writing Geeetech is having issues with the Marlin software mods to operate the sensor. The operational system with the proper mods for the 3D Touch must be loaded to the printer controller to initialize the 3D Touch.

Geetech supplies hex code for this printer rather than Arduino source. So, I can’t modify the software myself. I hope to eventually get the source like I have for the A20M and tweak the system the way I want.

Geeetech may be updating to the newer Marlin 2 code. Or moving from the installed Marlin 1.1.8 to the 1.1.9.  No idea or word from Geeetech at this time. Marlin 2 is not required but is the new version for 32 bit controllers.

I printed the two, factory supplied gcode print files and have included pictures of the results. Both are examples of the color blending possible with a single nozzle multi-color printer. The I printed some standard multicolored prints I designed.

The Texas coaster is unique as it is programmed for four nozzles and colors. The three filament colors (red, white, blue) and a fourth color which is a blend 50/50 of red and blue (purple). The purple is used for the background. Yes, Single nozzle multi-color printers can make new colors.

The A20T can also operate just fine as a single-color printer. The requirement is there must always be three filaments feeding into the nozzle.

In the future as I experiment with this printer, I will demonstrate many of the ways color can be combined and created with this machine. Far more options than three solid colors.