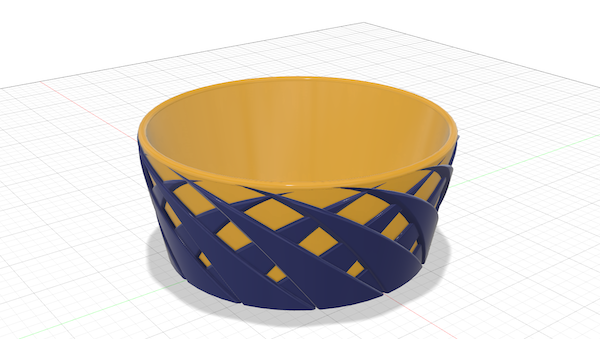 I created a project candy bowl similar to this several years ago. But it had vertical sides and smaller grass blades.  I also used a different multi color FDM printer than CETUS2 to produce them. This is an update!

Cetus2 KickStarter recently released new pictures showing the reconfiguration of the design back towards the original conception. Cetus2 is  back to the look of the early release version I am privileged to own here at KautzCraft.  In those CETUS2 pictures I notiiced the brand and color of the two spools of filament on the display machine. They are eSUN Satin PLA, purple and yellow.

I purchased a spool of each color from Amazon and are used to print this project.

Layer height is 0.20mm. Print time was about 9 hours using "normal" speed in UPStudio3. Surface finish is excellent and there has been no cleanup done before these photo were taken. One picture on the printer is shortly before the print finished.

I choose to use the purge tower for several reason. It always provides the cleanest color change especially with a thin walled model such as this bowl. I feel no compulsion to do "no purge tower" prints unless there is a clear expectation for success. Saving filament is a bogus excuse to sacrifice quality.

I also wanted to try that fancy base on the purge tower. The tower is actually about 4 times bigger in area than it needs to clear the CETUS2 nozzle, But the width provided by the wide base keeps it stuck to the build platform.  I have had smaller towers go astray. The tower weight here is 13.7 grams and that is exactly 34,25 cents worth of PLA.

I am presently using the new changeable nozzle extruder. The tip is bigger than original and has proven to me its size is of no concern. I can view the print progress with zero issues.

A note for the micro-inspection team. The tiny extrusion flaw visiable under the top rim of the last picture is a CAD error (very tiny unsupported top edge roll) already fixed in the CAD and eaisly removed from this very first print. Definately NOT a printer problem. Included here for your enjoyment. :)