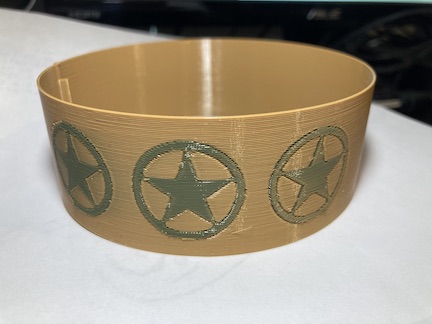 One of the selling features of the CETUS2 two filament 3D printer is its ability to change colors On The Fly (OTF). That claim is entirely true. But it took me some time to figure out how to do it well.

The primary ingredient with the CETUS2 is its very short “combined filament path" within its special extruder nozzle. The two filaments are introduced to each other (for single nozzle extrusion) very near the exit point of the nozzle.

This significantly reduces the amount of purge material required for a full change to the new filament. This "clearing of the nozzle" is generally handled by an extruder travel trip to what is named the "purge tower" that is built layer by layer alongside the desired print.

The purge tower consumes significant (but cheap*) plastic which could be better used in the actual model. It also requires far more valuable time for the purge printing and the two way travel to the purge area.

* It's not just about material cost

Purge towers are still recommended and can be the "shadow" type (built into the printed model). I recently discovered how to eliminate stringing in the purge travel moves - reported in a previous post. I will write about "shadow" purge in a later post.

Honestly, "On-the-Fly" color change held very little interest for me. I could see from the Cetus marketing photos it was (and is) not a perfect way to change colors.

But OTF is possible and can have application for certain projects.

There are some configuration requirements and with some users may be considered limitations. One is position of the model on the build plate. I have clearly demonstrated the left to right color shift with mixed 50/50 printing. This also occurs when changing from one color to the other.

The best OTF print area is in the "neutral zones" at the front and rear of the print model as located on the CETUS2 build plate. OTF will work traveling around the model, but there will be significant variations in the color changes depending on the model side direction.

OTF is also a perimeter color change. It does not function for flat top or bottom surface layers in my testing. Vertical layering only. As far as I can tell it works best with VASE style printing if one desires a clean, no smear, color change. (Like me.) But there may be artistic reasons for accepting the smear.

Jason Wu (Tiertime Support) gave me some tips for OTF printing. For clean prints he recommended I set JERK LENGTH to the maximum of 10 in the Print Configuration of UP Studio3 (UPS3) slicer. This cause a “pip” to be formed on the inside of the layer surface where the color change material is hidden. This is why VASE mode is used. No blockage of the large JERK. Nothing personal implied or intended... :)

These PIPS must be a consideration in One’s design as they are several millimeters in height. (see my pictures) .

I also discovered for best results I must set layer height and width to the maximin the design will allow. I use 0.40mm layers that are 0.70mm wide. I also bump the filament flow factor to 1.1. More would be better.

The reason is that for a clean quick color change, as much color change waste material possible must exit the nozzle in the shortest time and distance possible. That requires a large volume extruder flow.

OTF is not a good process for very fine layers (0.10-0.2.0MM) They require far too much printing travel to clear the color change.

BUT! There may be reason for wanting that smear effect for artistic effects. 3D printing can be as much ART as it is function.

All this is for my CETUS2 and new “rules may apply” when the production units are shipped.

Bottom line: On The Fly color switching does work. It’s up to the operator to choose when to implement the feature. In my honest opinion (IMHO) this is not for every two color print.

Purge towers (shadow and otherwise) will continue to be needed and used for most prints. But with the CETUS2 nozzle, the purge process is far smaller and faster than my previous 2 and 3 color single nozzle printers.