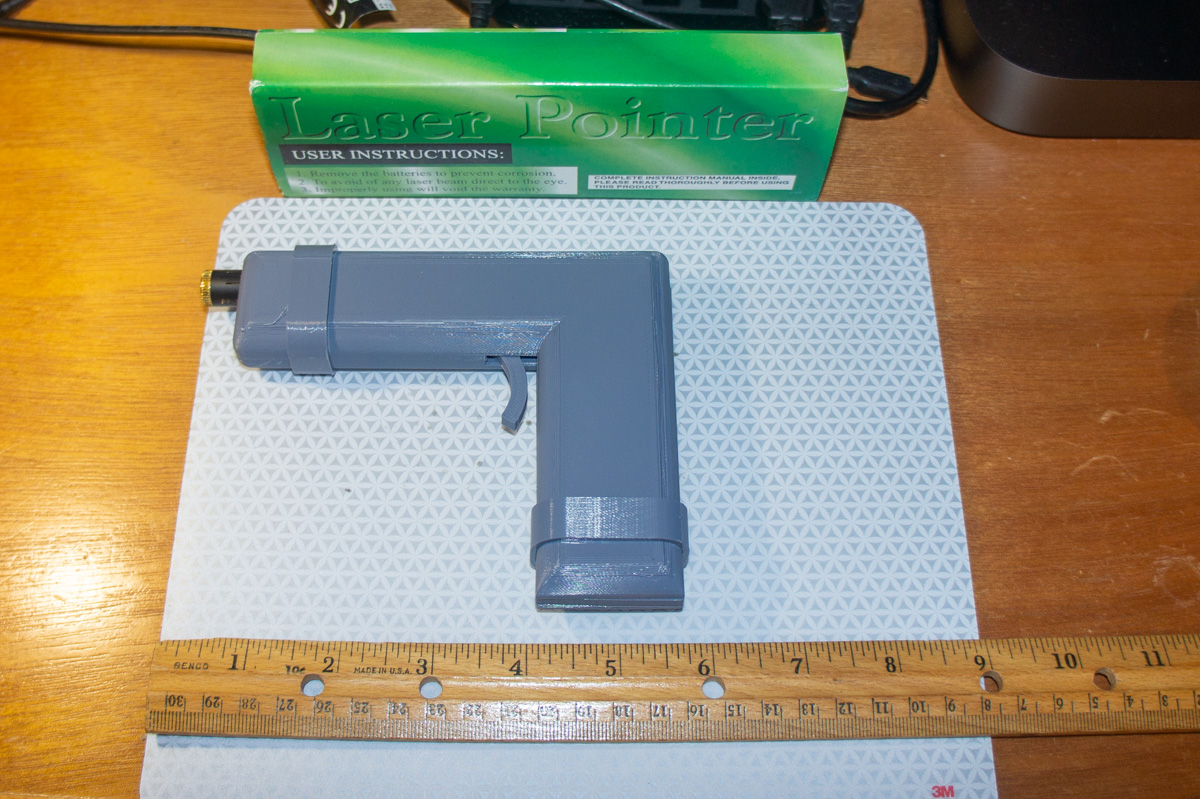 I just finished building a working prototype laser hand gun (pistol) using 3D printing. The laser is one of those laser pointer sticks used for slide show and teasing cats. It IS a real laser and I built a pistol shaped holder with a trigger to energize the laser beam. The only damage it is likely to do is to someone’s vision if they looked into the emitter when it is turned on.

Also, the fact that it now looks like a gun could get the user killed if they pointed the device at armed law enforcement and energized the beam. It’s almost harmless and makes no gunshot noise, but if I was a cop and saw what looks like a pistol with a red targeting beam coming from it, I might shoot first and ask questions later.

SO, this LASER device is not a TOY and needs to be deployed in a disciplined matter. It could get someone holding it killed.

My plan is to use it to persuade some nesting doves to stay away from my porch. Every year they try roosting, drop their bird crap all over tables and furniture and everything else on the porch, as well as dropping hundreds of nest building sticks.

I think nesting season is over this year but will try the red laser if they try again. It’s a war between me and the two lovey dovies.

Back to the laser pistol. The first prototype worked as intended. It was ugly and square and very hard on the hands to hold because of the square corners and 90-degree edges. I was interested in getting the trigger to function and not the appearance of the case.

The laser pointer has a small push button in an awkward location towards the LED end of the case, so I built a basic version one prototype just to test and find a way a trigger action could be utilized to energize the laser beam. That problem was solved after testing several variations in the first prototype. Version two includes the final trigger design and rounding the sharp corners on the body, making it more comfortable to hold and use.

There is a slight and satisfying audible “click” when the laser is switched when squeezing the trigger pull. Accidental activation is not dangerous unless one has their eyeball peering directly into the end of the laser at very close range. (Again! This is NOT a child’s toy!) 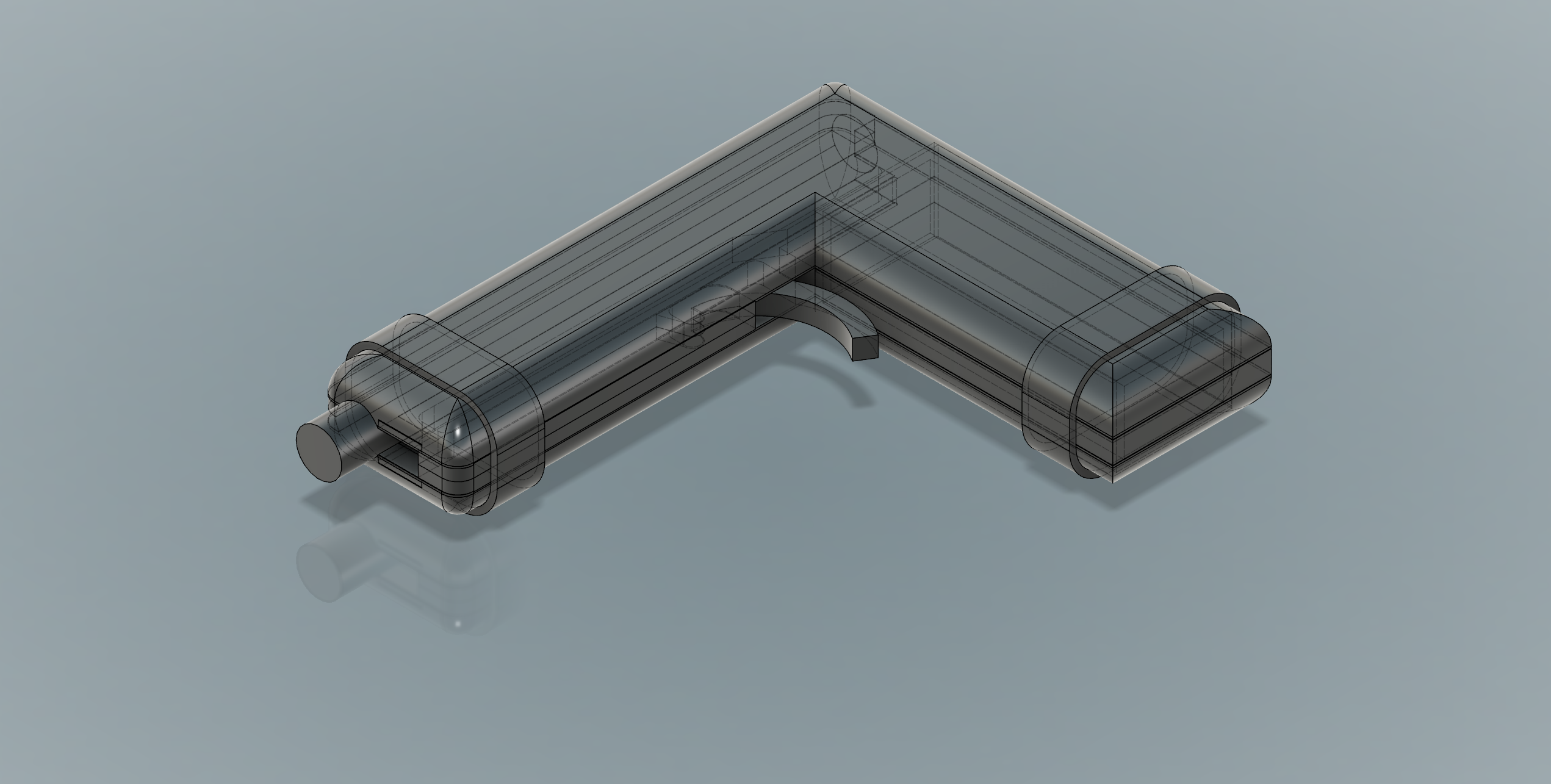 That’s version two in the pictures.

The bands around the front and the handle are to hold the case together. There are no metal parts like metal screws used. All parts are 3D printed PLA plastic. The only metal is the laser pointer.

It’s not designed to be an X-ray non-detectable stealth gun. Someone is going to think about that with all the media negative hyper-propaganda about 3D printed plastic guns. The appearance is that of a 3D printed gun, so it is best treated as if it were lethal. Read again the second and third paragraphs above.

I am considering NOT putting the .stl files openly on the internet. There seems to me to be too much liability with shoot-first cops and child’s play even if it is a low powered device. I watched my pre-teen granddaughter “role-playing” with it. She was totally safe, and maturing from child-hood, but I could see where it might go with a similar group of peers of any age, showing off and passing it around without proper instruction and self-discipline. 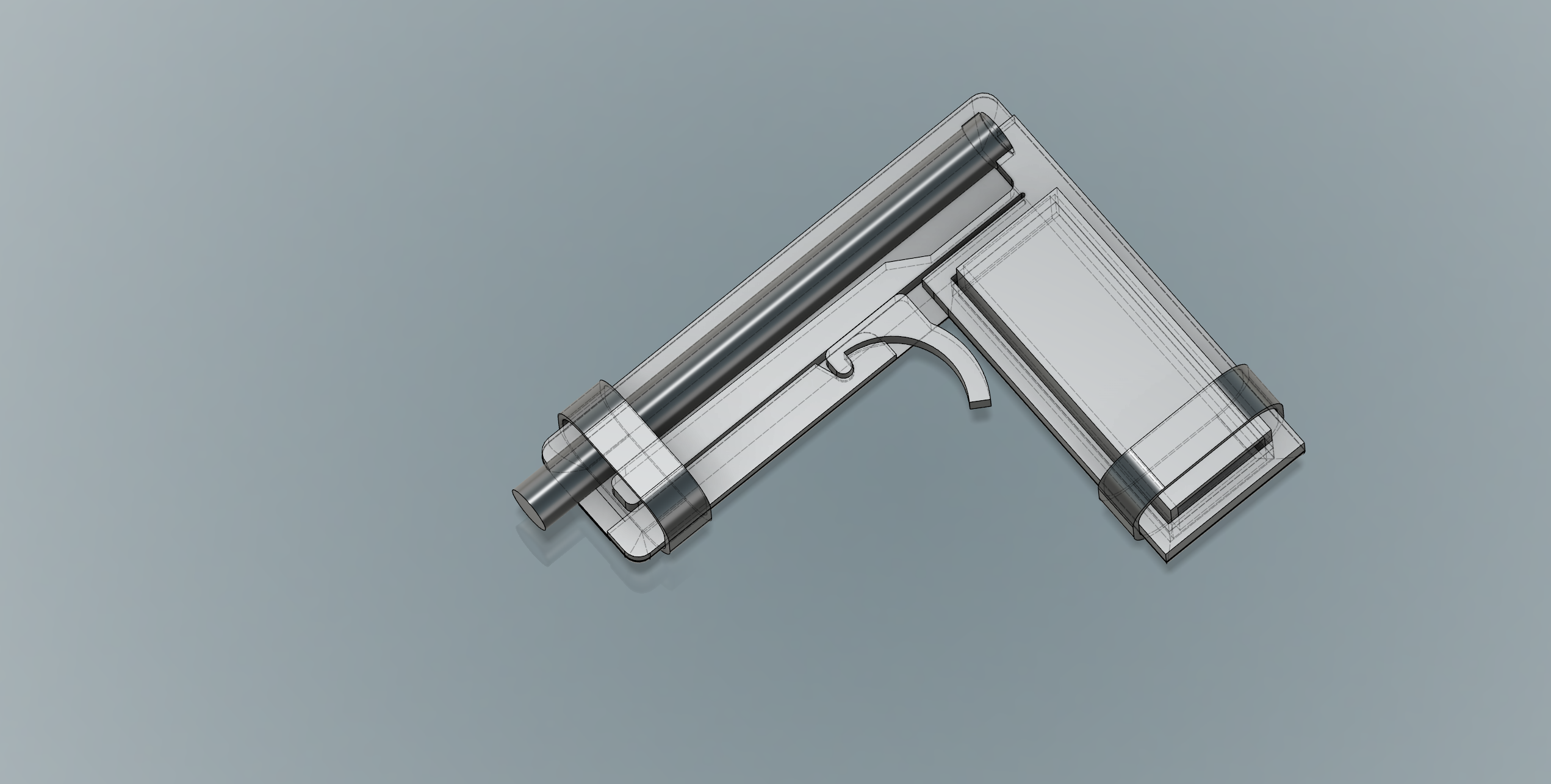 Use is far from my control, but I am aware of the risk potential. My case design is safe, and I am not providing a source for the laser device.

WOW! So much concern over human stupidity and ignorance.

I enjoyed the project and working out the simple design. I loved using FUSION 360 for the CAD and printing the prototypes on the Anycubic Kossel (delta) printer.

All parts are 3-layer shells. The trigger and switch are 40% fill and the case halves are 20% fill. All layers are 0.20 MM. The material is PLA plus. ABS would work well if printed with NO warps. No supports are required.

The design and trigger configuration are 100% original. This project typifies the sense of accomplishment creating a product from initial idea to functional operation. Truly making something, starting from nothing, start to finish.

Lovin’ what I can do when I try.