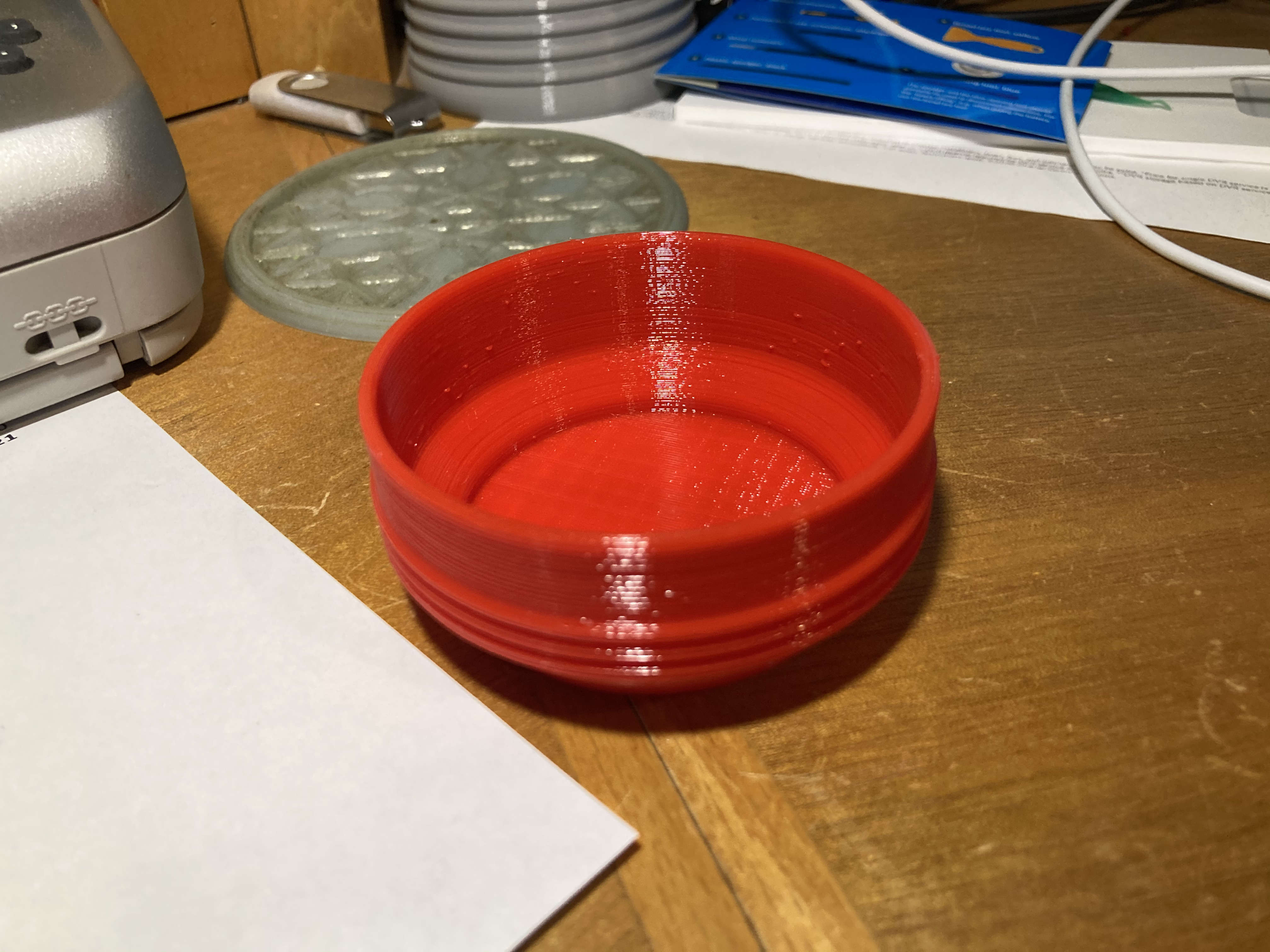 Working with a new filament type for FDM (Fused Deposition Modeling). Called TPU (Thermoplastic Polyurethane) It produces rubber-like flexible prints. Many producers and brands. I have no way to evaluate, so I picked a brand “Overture”.

I read a lot of prose on what brands are best. Most of what is printed is pure BS. It is like picking which tree in the forest has the best wood for your current woodworking project. Real craft people can adjust for slight variation in materials and produce excellent products.

It’s also like baking cookies. There are always slight variations in flour brands and also various “grades” of flour.  Bread and cake flour are both still flour.  OK - rant over…

I am learning how to work with my new TPU.

The TPU filament is like boiled spaghetti, a bit past “al dente”. It is SOFT! Very flexible. For that reason, the suggested print speed range is between 20 to 40 mm/s with 40 really pushing it. It seems 10 to 20 mm/s is a great speed for printing. No so good if you think FDM goodness is judged better by how fast you can go…

I also noticed material is extremely under fed and I have pushed extrusion multiplier to 1.5 (150%). Most PLA and other hard filaments I run between. 0.9 and 1.0 for example.

I am also playing with UPStudio3 (BETA) using my CETUS Mk3 printer with heated bed. CETUS has a very closed coupled direct drive filament feeder. I cannot see TPU working well with ANY Bowden type printer. I have not tried, but with all the filament flex, a Bowden feed will be total frustration controlling the print.

Suffice, the Cetus drive is working very well.  UPStudio3(beta) is not quite ready for “prime time” for use with Cetus. It works, but there are limitations that must be removed before getting my stamp or approval as an everyone’s slicer/ printer.

The next step with my new TPU material is discovering what it can print. Things that must be flexible. How do printed supports work with TPU? I will be “playing” with TPU and looking for the “killer application” that needs to be made with TPU. 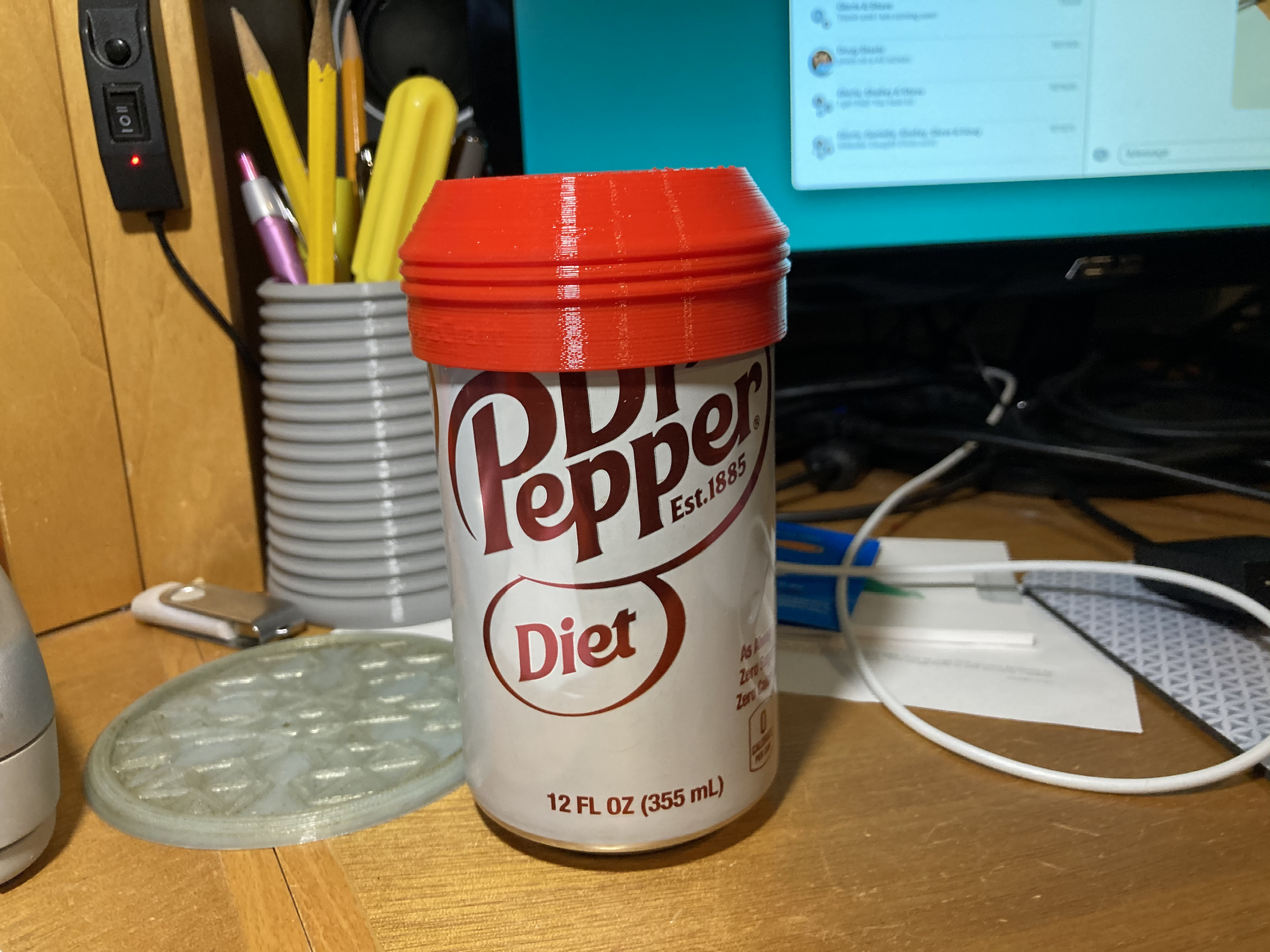 My soda can cap in the picture is a good start. The very first print was air permeable (not airtight) so will experiment with line widths and flow rates. A rubber cap should seal…  all part of mastering the process. 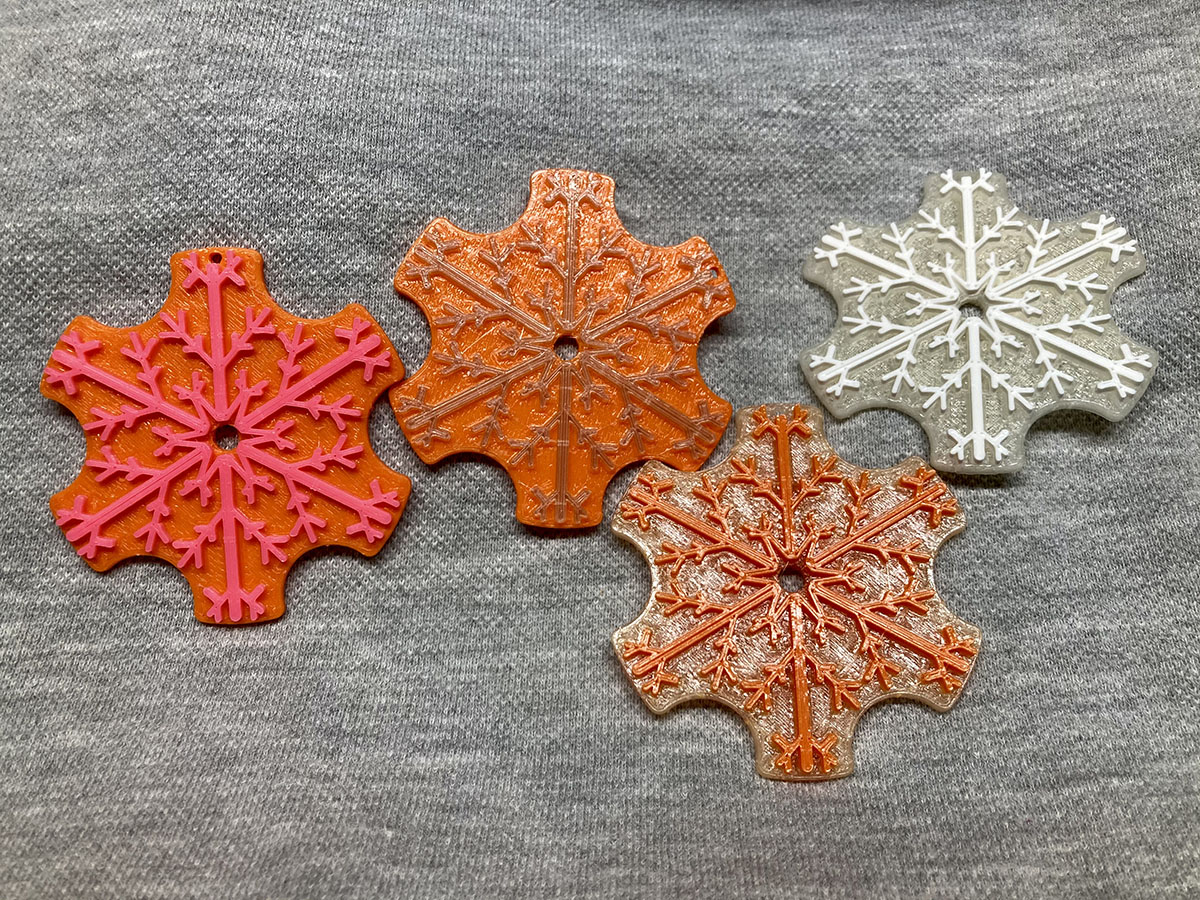 This snowflake is an original KautzCraft design. It is 75mm in diameter. The bottom layer is 3mm high and overall height is 5mm. Designed for a two-color 3D printer. CAD software is Fusion360. Slicer Simplify3D. The 3D printer I am using is the Geeetech A20M, single nozzle, two color.

I had real orange and real pink filament already on the printer, so that became the colors for the first prototype print. Not a realistic snowflake color combo but who says it must be realistic. Certainly, not me…

I have some natural PLA so I swapped that non-color for the pink. First, I printed the snowflake skeleton using the natural. That looked interesting. But I realized the natural should be the base color. A couple of edits in the slicer file and the colors were soon reversed. Software edits are faster and easier than swapping filament spools on the printer.

Much better, but the natural PLA had a bit of orange glow from the orange skeleton. I replaced the orange filament with white and I have the white snowflake look I wanted.

That does not mean I won’t continue to play with other color combinations. The rule is there are no rules.

To display the ornament, there is a small hole at the edge for threading green florist wire through to form a loop or a simple wire wrap.

The center hole could be used for a single LED light, but that was not the intention for the hole. It is simply a decorative detail.

The back side is lightly engraved “Christmas 2020” as a reminder when it was made. Also note: The snowflake “skeleton” is a solid penetration from back to front. 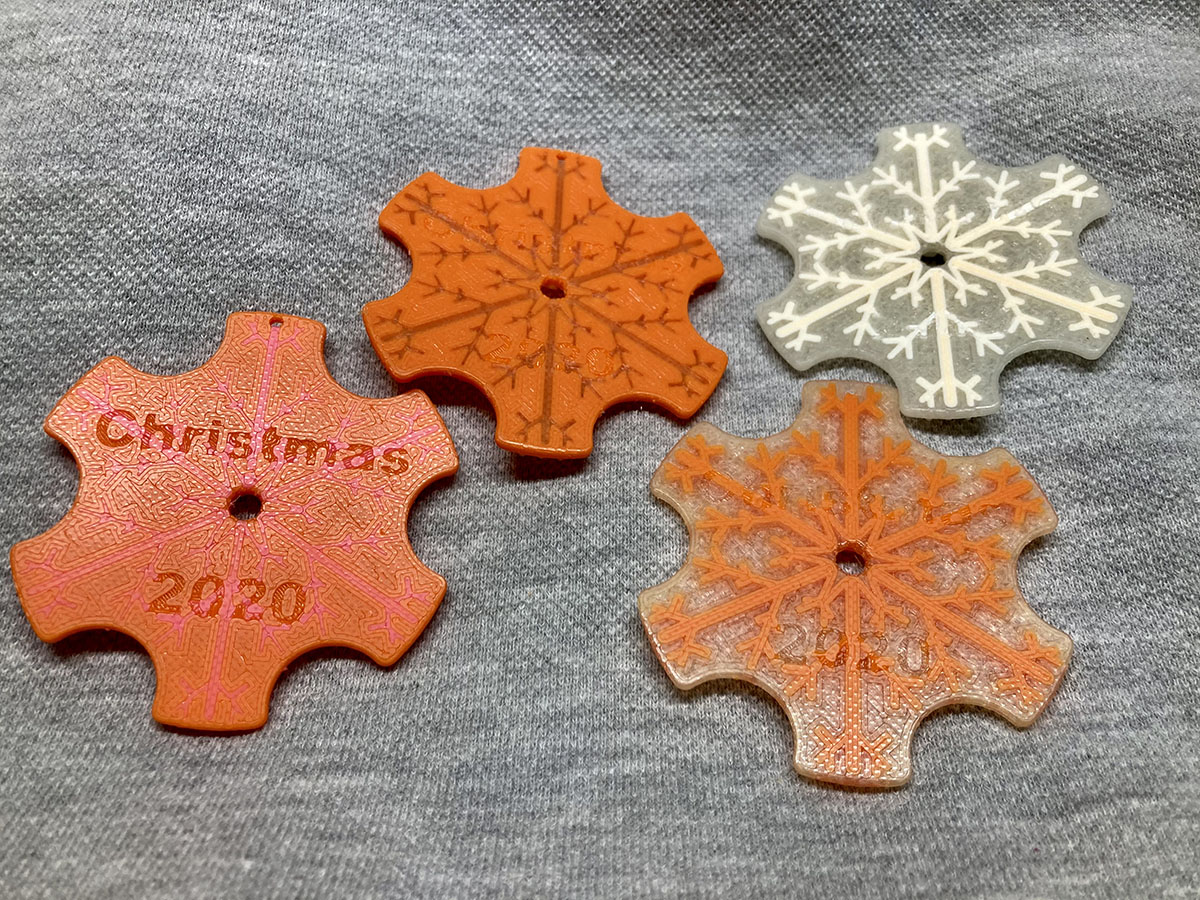 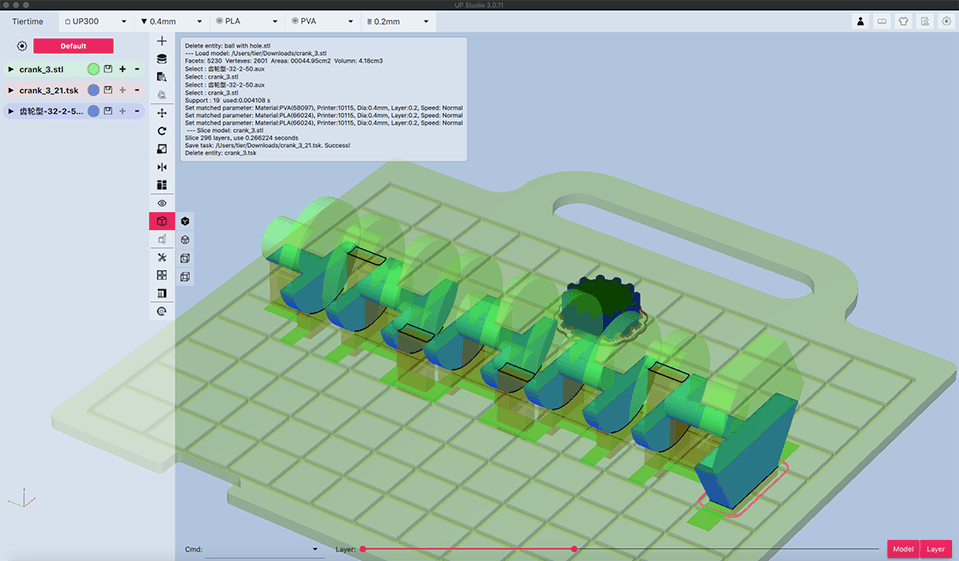 Just started using the Beta (code named: Soda) of Tiertime’s UP Studio 3 (UPS3) software.  It is a slicer and machine control program for the Tiertime Printers. Presumably, it can also be configured for other brands of FDM printers.

I am using it with the three Cetus printers I own. A MK1 and two MK3 (one with the heated bed.)

Tiertime offered a slicer/control software they called Catfish. UPS3 is a direct outcome from the Catfish code. I have been “playing” with Catfish since it was released.  It was not perfect, but it did work. One fault was it crashed the MK3 with the heated bed. Not ready for prime-time users.

UPS3 has fixed all the issues and runs all my printers just fine. The slicer is very fast (not a high priority on my list).

Every variable is adjustable. UP Studio prior to Catfish gave the user very limited variable control. Now the user can get into very serious trouble if they don’t understand all the functions that are now adjustable.

UPS3 is still in BETA and the documentation is far from existence. Reading Catfish information will be a big help.  I think the look and feel of the UI will be adjusted before it leaves BETA.  It’s not bad, but in my opinion lacks some of the “polish” of the earlier UP Studio releases.

Catfish and UPS3 both use a two step process for slicing and then machine control. The machine control is named “Wand” and is a definite separate program from the slicer. The slicer creates a task (.tsk) binary file that is used in Wand. Probably a binary gcode not editable by the user. The slicer will also create a text gcode that is NOT used for Wand.

I am liking what I see far better than the older UP Studio and fixes the issues in Catfish.  It is now my choice for running my Cetus printers.

There is one "bug" I discovered and sent a discription to Tiertime. Large models create quite large  task (gcode) files. My MK3 Cetus with the high powered print platform will heat the platform without temperature limit control when uploading a print file. Large (10MB) files can take 4-5 minutes to upload. The platform will exceed desired setpoint (60C) by 130 to 150% during large file upload. No problem with small files, But I create and print some big files.

Explore UP Studio 3 Beta: Soda for yourself. Find it here: https://www.tiertime.com/software/ .

UPDATE (11/9/2020)  --  Jason Wu from the Tiertime help desk just informed me there is an internal high temp limit in Cetus. Here is his statement:

Since the file transfer is not completed, the machine did not know what platform temp it should go.  So it will heat up base on an internal default temperature, which we set as 90C.  The temperature control is still on. 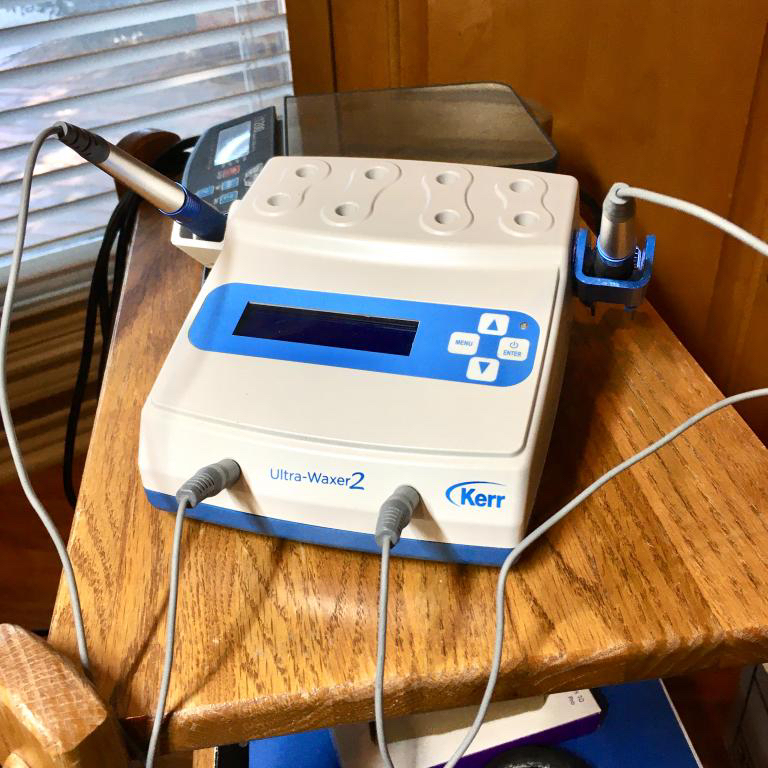 I have an expensive Kerr Ultra Waxer 2 machine that is an electrically heated hand-held wax carving pen tool. It is used to sculpt wax in model and jewelry making. This is the base unit and services two pens. The empty holes in the top are for storing various shaped tool tips.

On each side are brackets for placing the hot pen when switching between pens. The brackets are held in place with a single screw and three plastic locating pins through the side of the case.

The machine fell off a small table where I had placed it as I was moving the table. The plastic bracket on the left side shattered from the two-foot fall to the floor.

It’s a small but rather complicated part. I made a sketch and took very careful measurements. I had a flat bottom, and this gave a good reference for locating the pins and holes.

I’ll admit I made two prints. The first one I missed a side pin placement my a few tenths of a millimeter. Easily corrected in Fusion 360 sketch and a new STL file was printed. About 80 minutes at 0.15mm layer and normal speed on my Cetus printer. Material is white PLA.

I gave some consideration to the hot pen storage and using the PLA plastic. I have a good STL file I could print again in ABS if needed. In use the bracket never gets warm. Should not be a problem.

This is evidence that I occasionally use 3D FDM (plastic) printing for practical applications. Not just Junque “stuff”.